The Harriet O’Connell Historical Room is currently housed in the basement of the Fox Lake Public Library, 117 W. State Street in the City of Fox Lake, Wisconsin. Harriet O’Connell lived through the 1970’s, and had a long life. She wrote about Fox Lake on the back of used papers she would have created as secretary in her brother’s law office. He was a Dodge County judge.

When O’Connell died, all her bits of news and jottings found their way to the basement of the Fox Lake Public Library. The room was watched over by the elderly women of the Fox Lake community until the last one died. Julie Flemming was then given the key to the room, at which time she began sorting and cataloging the items in the room. It was in 1982. The current Library Director oversees the collection.

Bound volumes of the Fox Lake Representative newspaper are available for research. This newspaper began publication in 1866 and ended with the last issue in December, 2014. They are also now on microfilm through the year 2011. All issues of The Representative are bound.

The Harriet O’Connell Historical Room volunteers are working on indexing the room’s contents according to the Wisconsin State Historical Society’s system of organizing materials. These include some books, scrapbooks, obituaries, and over-sized documents. More scrapbooks, ledgers, tax records, and photos are yet to be cataloged.

Beginning at the earliest days of Fox Lake much indexing and cataloging has been done. However materials related to 1940 and later have not been finished yet.

The Harriet O’Connell Historical Room’s contents include several bound issues of the Beaver Dam newspaper The Argus, dating from 1882 to 1944. There is a great deal of Fox Lake information in this newspaper.

Work within the historical room is required to be coordinated through the library director to monitor usage of resources and satisfaction of patrons.  Access to the room is not open to the public, but all contents are accessible through this coordination via director assistance with catalog access and available hours with appropriate assistant coverage.

The Fox Lake Public Library can be reached at 920-928-3223, or by e-mailing the Library Director at eanders@monarchlibraries.org 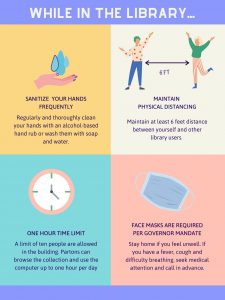